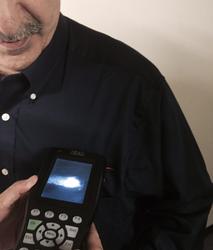 Lepton-id a division of ZBA Inc., has developed a method of adding covert security features to apparel to counter the ever growing imports of counterfeits. In addition, we have a low cost method of detecting such features.

Through a special process, we have been able to add optical security taggants to standard sewing thread.  These taggants have unique physical and optical properties. With respect to the user of the threads there is no difference in appearance and flexibility and tensile strength of the thread.

The microscopic (nano particles) sized taggants are trapped within the fibers of the thread  material and resist being washed out.  The thread is capable of being used in any sewing machine that would normally use that particular sized denier of  thread. (No cloging of thread going through sewing process as with competing technologies.) In fact the only way to remove the taggant from the specific garment is to cut out all of the thread that was used in making the garment in the first place.

Lepton id sells two types of standard taggant detectors that can be used to identify the threads. They are the VI1170 and the VL6300.  The VI1170 used to detect the taggants within the thread.  The VL6300 can actually detects the full hidden image.  It would be up to an  inspector to know the location of the thread that has been loaded with the taggant so he (she) may inspect the garment to see if the threads are indeed genuine simply by the fact that the specific threads at a pre-defined location are detected by the aforementioned devices.

The actual thread with embedded taggant is easily detected with our standard detectors (see Figure 1).

The threads can be used in many different location , see Figure 2  below  {ZBA LOGO} , we have sewn the letter “Z” of our logo with Taggant embedded thread, undetectable with the naked eye.

In the next example, (see figure 3.)  it should be noted that only the "Z" of the ZBA logo  used the threads that were loaded with taggant. This is the only portion of the garment detectable with the standard scanners. The scanner glows confirming the garment is genuine.

The thread can also be used where the clothing tag is attached to the main garment. The taggant loaded threads may be used in any seam on essentially any garment in any location that is relatively easy or inconspicuous to check.

Many apparel application uses are being developed from sneakers to high end bags, from jewelry to make up, from clothing tags to silk ties, its up to you how and where to apply our Lepton-id taggants. 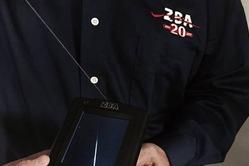 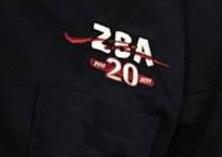