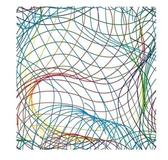 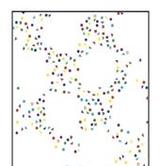 
Lepton-id has developed an anti-counterfeit technology method enhancing the security of id cards and documents using a proprietary method hereinafter referred to as Galaxy.  The Galaxy method of securing a document is to utilize a series of unrelated manufacturing parameters that are specifically designed to have low tolerances and then correlate these items into a single un-copyable data set.  The unrelated parameters can be formed from a variety of different manufacturing steps, the only criteria is that the  steps are unrelated to each other.

This technique has been applied to an ID card and the security hologram typically located onto the card. As shown in figure 1 below the hologram comprises multiple geometric shapes. For trade secret reasons some of these items are pure diversionary and other have meaning to the Galaxy system. The combined hologram is shown in figure 2. The ability to sense some parameters of this hologram in conjunction with some other physical parameters of the ID card will validate the authenticity of the ID card.

The use of RFID technology for Identification cards is becoming a common place occurrence. More and more information can be kept on the RFID cards regarding both the personal and/or medical data. This data can range from a several tens of bytes to tens of kilobytes, especially if biometric data is stored such as a facial photograph or an image of a fingerprint scan, or an Iris scan, etc. This information along with other items such as Social security numbers are fertile ground for those who are in the identity theft business. While most cards are password protected and/or encrypted there are brute force methods that can be used to defeat the encryption. The Johns Hopkins lab found that the code could be broken with what security geeks call a "brute‐force attack," in which a special computer known as a cracker is used to try thousands of password combinations per second until it hits on the right one (1). More complex encryption algorithms will also make the hacker’s job much more difficult. But as we have seen in the media these attacks are becoming more common place.

Lepton-id's  Galaxy Technology which is outlined here uses a novel patented method of generating the protected keys to secure the RFID card and  prevent an ID card from being compromised.